Vehicle Of The Year 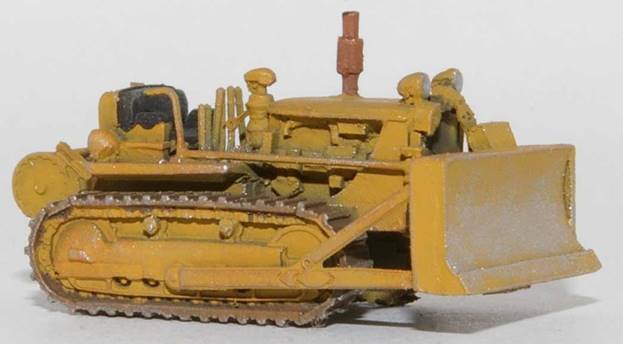 And the Enhanced N Scale Vehicle of the Year Award goes to Trainworx for the Budweiser Peterbilt 379 truck tractor with 40-foot trailer.

Artitec has been producing N scale models for just a few years now, with the D7 dozer only the second Artitec model nominated for the New N Scale Vehicle of the Year Award. Be sure to thank Artitec and Trainworx for bringing us these well detailed N scale models! 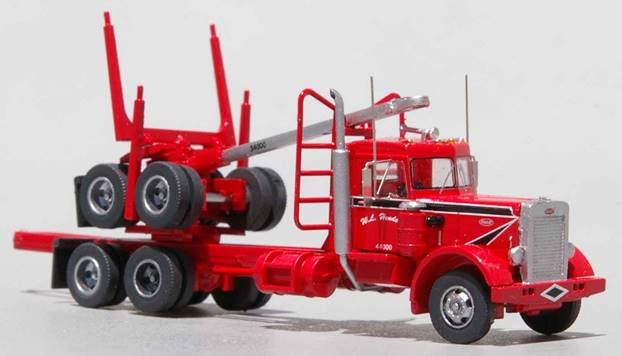 And the winner of the Enhanced N Scale Vehicle of the Year Award was another Trainworx model. This one a Kenworth W900 painted to match the real truck once owned by N scale modeler Mike Sabia! 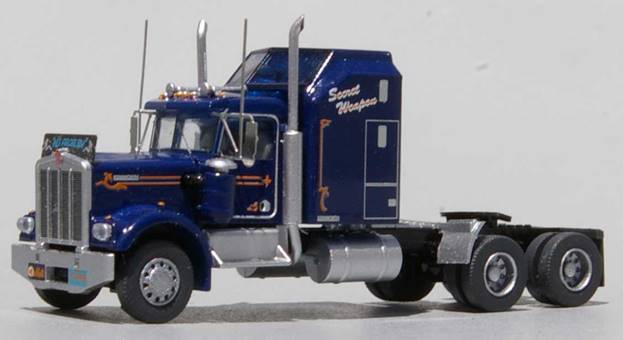 Congratulations to Trainworx for winning the awards, and thank you Trainworx (and the entire Sanders family) from our community of N scale modelers and vehicle collectors who really appreciate you bringing us these incredibly detailed models.

Showcase Miniatures has announced their next N scale vehicle model will be an “ST Class” rotary dump truck. Quoting from the Showcase website; “This kit features resin cab and one piece dump body, pewter parts and stainless steel photo etched parts. The hi-rail can be assembled deployed or retracted. We include a 3D printed wheelset so it can be displayed on the track. A vacu-formed windshield is included.” Dump trucks of this type are used by railroads and railroad construction contractors to dump ballast and rip rap loads while on the rails onto railroad roadbed and right of ways. 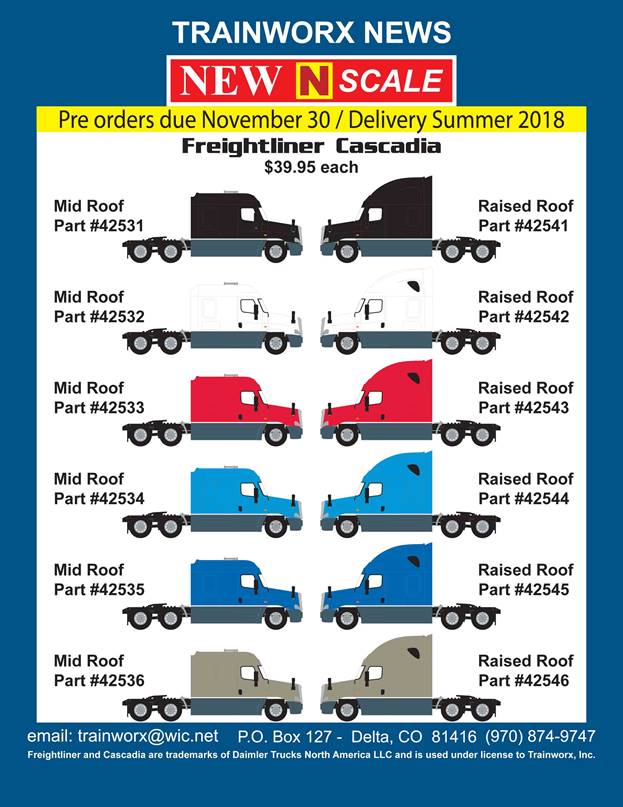 Pat Sanders of Trainworx has announced that advance reservations are now being taken for the Freightliner Cascadia, one of the most prevalent modern class 8 highway truck tractors in use today. The prototype was announced in May of 2007, with the first trucks rolling off the production lines in August of 2007. Also announced are new 53' van and refrigerated trailers. Check our Industry News section for more details. 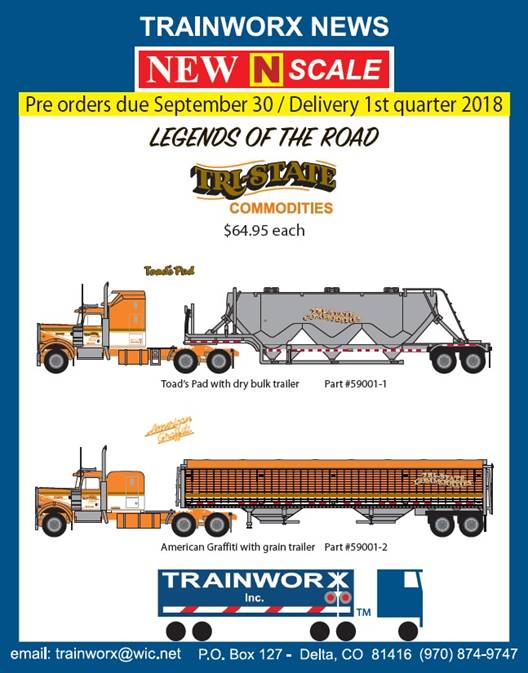 Pat Sanders of Trainworx has announced the first N scale models to be released with the recently announced Timpte grain trailer and pneumatic dry bulk trailer in the Trainworx "Legends of the Road" series. The first two models both utilize the Kenworth W900 truck tractor and respective trailers in the beautiful Tri-State Commodities paint scheme. Check our Industry News section for more details.

The winners of the N Scale Vehicle Association’s Thirteenth Annual N Scale Vehicle of the Year Awards were announced Saturday, June 24 during evening banquet at the National N Scale Convention in Pittsburgh, PA. The winner in the assembled model category was the Trainworx 53-feet refrigerated trailer.

The winner in the model kit category was the Showcase Miniatures GMC 9500 with Holmes wrecker.

Pat Sanders of Trainworx has announced a variety of vintage tanker paint schemes for the Peterbilt 350 and Peterbilt 351 tractors to pull. Pre orders are due June 30, 2017 with delivery expected in the first quarter of 2018.

The Peterbilt 350 tractors and tank trailers will be available in the five paint schemes shown below: 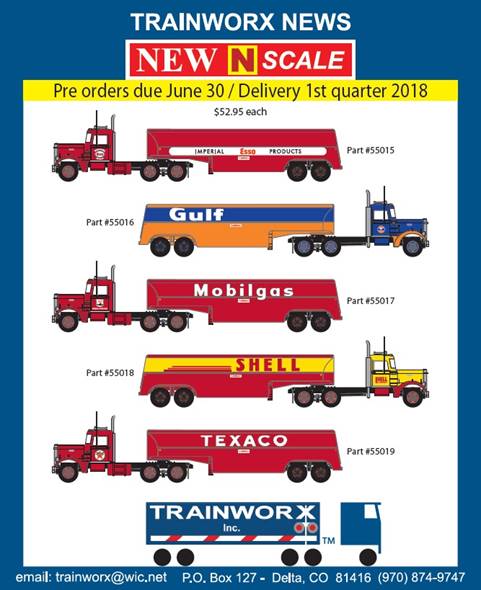 And, the Peterbilt 351 tractors and tank trailers will be available in the six paint schemes shown below: 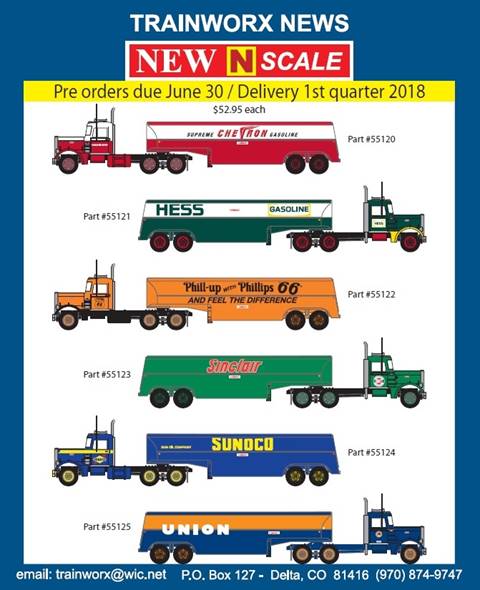 The winners of the N Scale Vehicle Association’s Twelfth Annual N Scale Vehicle of the Year Awards were announced Saturday, July 2, 2016 during the evening banquet at the National N Scale Convention in Overland Park, KS. The winner in the assembled and decorated model category was the Trainworx Peterbilt 379 with 52-ft Merritt cattle trailer, AKA the "Bull Hauler."

Both Trainworx (the entire Sanders family) and Showcase Miniatures (Walter and Debbie Vail) had display tables at the convention and were able to receive their award certificates in person! We congratulate both recipients!

The prototypes for the Kenworth limited edition Bicentennial trucks were the first tractors equipped with the new for 1976 raised-roof Aerodyne sleepers. The VIT stood for Very Important Trucker, and the 200 reflected the production was limited to 200 trucks. And in keeping with the authenticity and accuracy of these prototypes, the Trainworx models are also limited edition, with only 200 of each model produced!

You can see more of these colorful models on the Trainworx YouTube Channel. 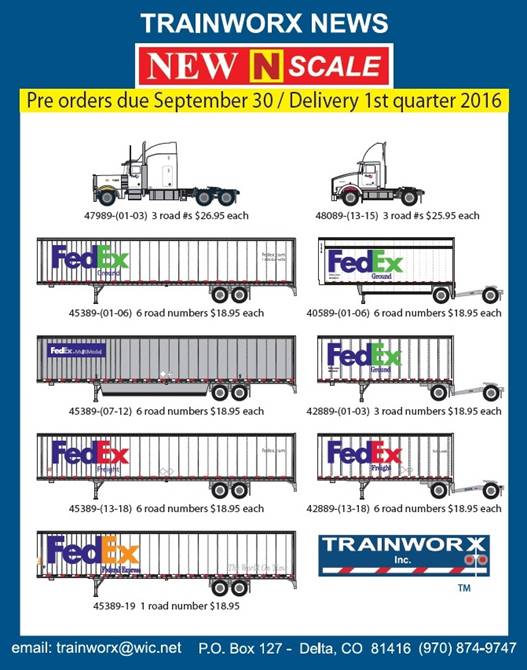 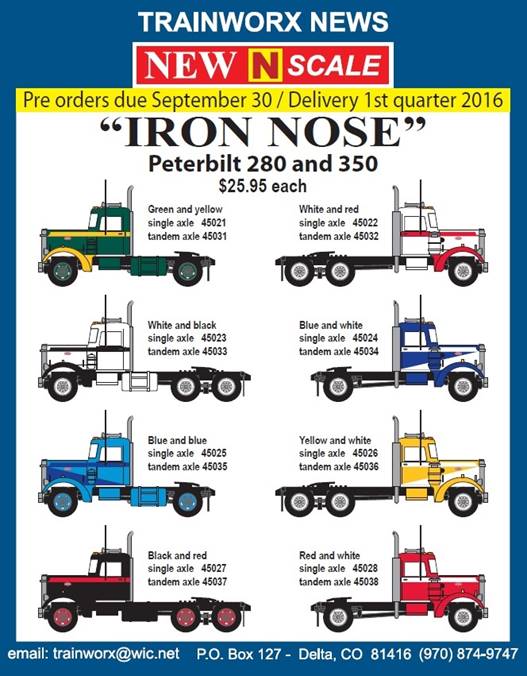 But that's not all that's new! The “Iron Nose” Peterbilt 250 and 380 truck tractors has also been announced. This is not the same tractor that was used for the Duel movie truck! You may view or download the color flyers at these links: 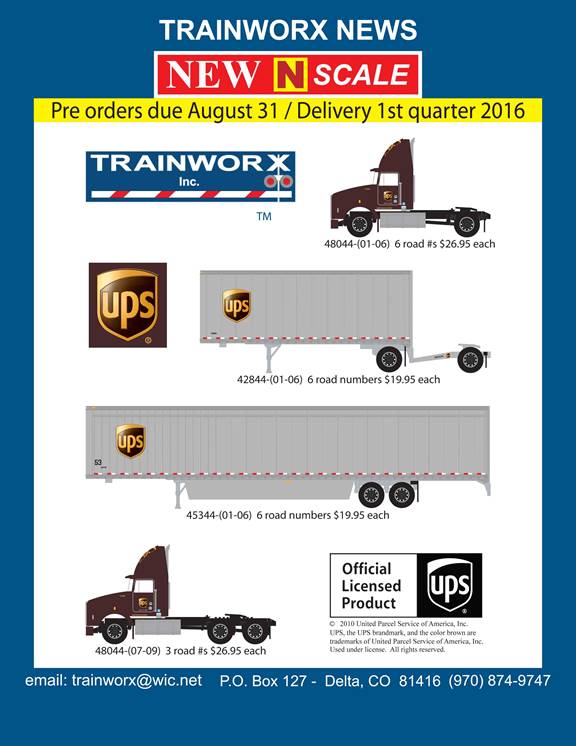 Pat Sanders of Trainworx has been really working overtime on all the new N scale truck and trailer models and has just announced the next release. This is the first release in which the tractors and trailers may be purchased separately. The tractors are contemporary Kenworth T800 day cabs that UPS has been purchasing for its growing fleet of alternate fuel vehicles. The 28-ft pup trailers are based on Great Dane flat floor trailers that UPS purchased in 2003. The 53-ft trailers are based on the large fleet of UPS Stoughton flat floor trailers. Very impressive new lineup of models from Trainworx!

The winners of the N Scale Vehicle Association’s Eleventh Annual N Scale Vehicle of the Year Awards were announced June 27 during evening banquet at the National N Scale Convention in Sacramento, CA. Those attending the convention had the opportunity to vote for one assembled and decorated N scale vehicle model and one N scale vehicle model assembled from a kit. The winner in the assembled and decorated model category was the Rietze Mercedes-Benz Sprinter ambulance and the winner in the kit category was the N-Scale Kits Flexi-van auto carrier trailer. 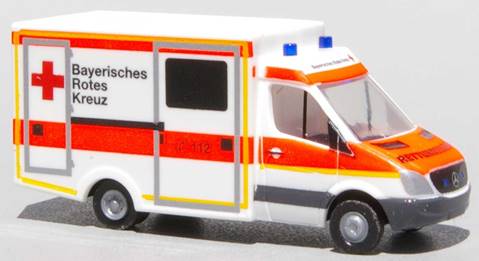 In addition to the models selected by popular vote, the N Scale Vehicle Association awarded its first Excellence ‘N’ Innovation Award to Trainworx for the five tractor/trailers released in paint schemes from movies and television shows in which the truck was an essential element of the plot.

Pat Sanders of Trainworx has announced five new tractor-trailer models based on movies and TV shows shown above. Based on these photos these are going to be outstanding models and adds sorely need North American prototype variety to N scale layouts and collections! From top to bottom: 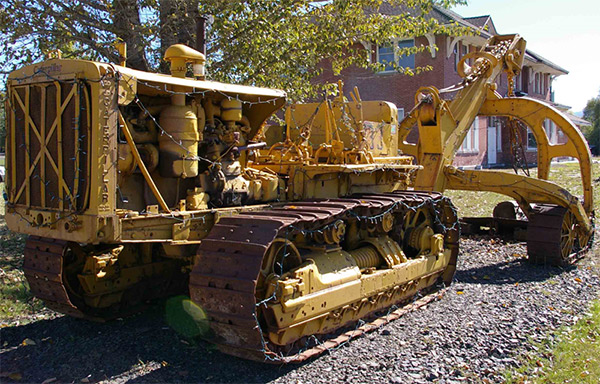 We're proud to introduce a new feature to our web site, Proto Photo Files. You will find links to Proto Photo Files under our Resources link in the left column menu. Our first Proto Photo File subject is a Caterpillar crawler and logging arch very similar to our 2013 Model of The Year winner, the GHQ Models' pewter kit. Be sure and check it out! [posted 01/03/2014] 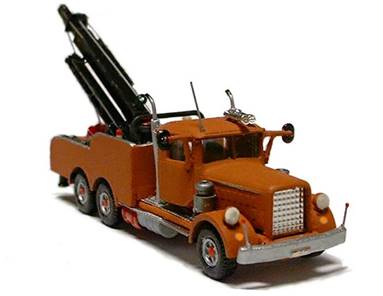 We are very pleased to present Photo Gallery 3. As we build our collection of extraordinary examples N scale vehicle modeling we ask you to send your photographic contributions to be included in our future Photo Galleries. Our feature photo above is from Markus Schiavo. Markus built this tow truck from a Wiking Mercedes-Benz L 10000 ten-wheeler. Check out the details in Photo Gallery 3. [posted 12/02/2013]

We are working diligently to bring together the first world class resource for vehicle modelers in N scale! Our goal is to deliver to you informative and timely updates on the following:

We are definitely a work in progress and have only begun our journey to building a world class resource for N scale vehicle modelers. We hope you become a participant and contributor to our web site and enjoy sharing the work of modelers from around the world.

N Scale Vehicle Association was formed to promote the modeling and collecting of 1:160 scale model vehicles. N scale is a model railroading scale that uses 9 mm gauge track, which is commonly referred to as N gauge. In North America and most of Europe, 1:160 scale model railroad equipment that represents standard gauge prototype equipment operates on 9 mm gauge track.

Watch these pages as we progress! Check back often.